Over the last decade, Christopher Simmonds has risen through the ranks to become one of the most sought after creative visionaries for fashion brands.

His approach to creative development is one instilled with a sense of freedom and creative tension—pairing high with low, cultured with street, and traditional with the radical.

He was one of the key figures behind the Gucci re-imagining that has garnered so much industry attention, providing the art direction for the storied fashion house since 2015. A 360º creative collaboration with the brand, Christopher Simmonds has worked across Gucci’s advertising, visual identity, web design, packaging, digital and social media content—all as part of his creative direction remit.

During his creative partnership with Gucci, Christopher Simmonds has collaborated on a range of photographers and film-makers, including Glen Luchford on ready-to-wear, fragrance, and accessories campaigns for 10 seasons and counting.

For each seasonal fashion campaign, Christopher Simmonds creates assets designed to tease, sustain and prolong engagement with the content. Before the launch of a campaign, a series of social media films introduces the narrative in an unexpected way that encourages dialogue and following across social media and online platforms. The campaign launch sees the reveal of the film and corresponding advertising stills. Following the launch, an extensive accessories shoot details the hero products from the collection and increases the longevity of the campaign overall.

Below we highlight all Gucci projects from the last year. From seasonal fashion campaigns to fragrance TV commercials and special capsule collection projects, the narrative across the various collaborations ties back to the overarching brand philosophy. 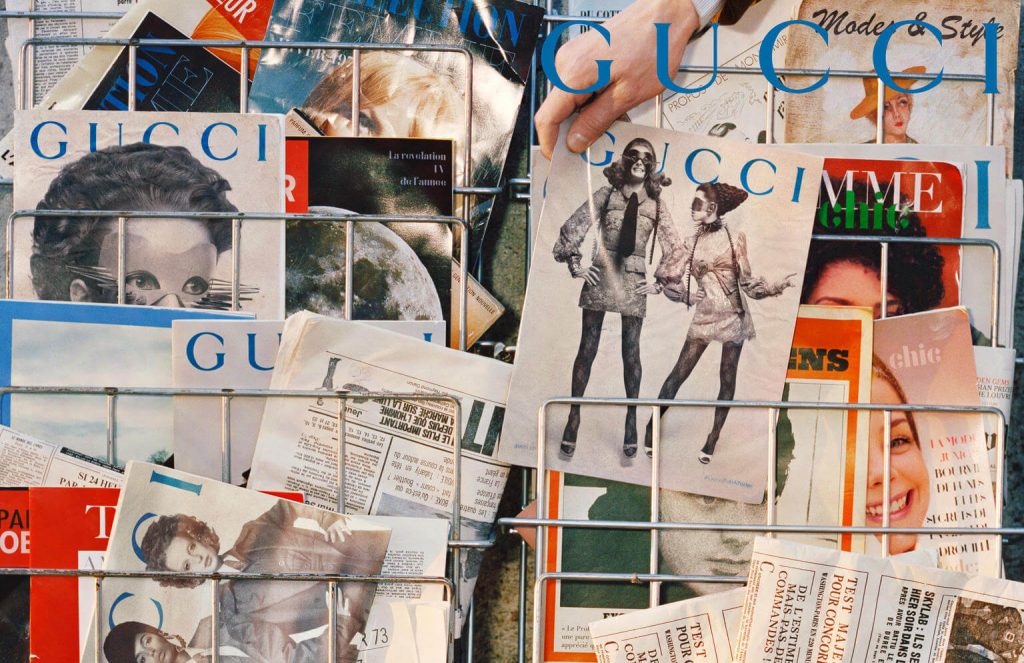 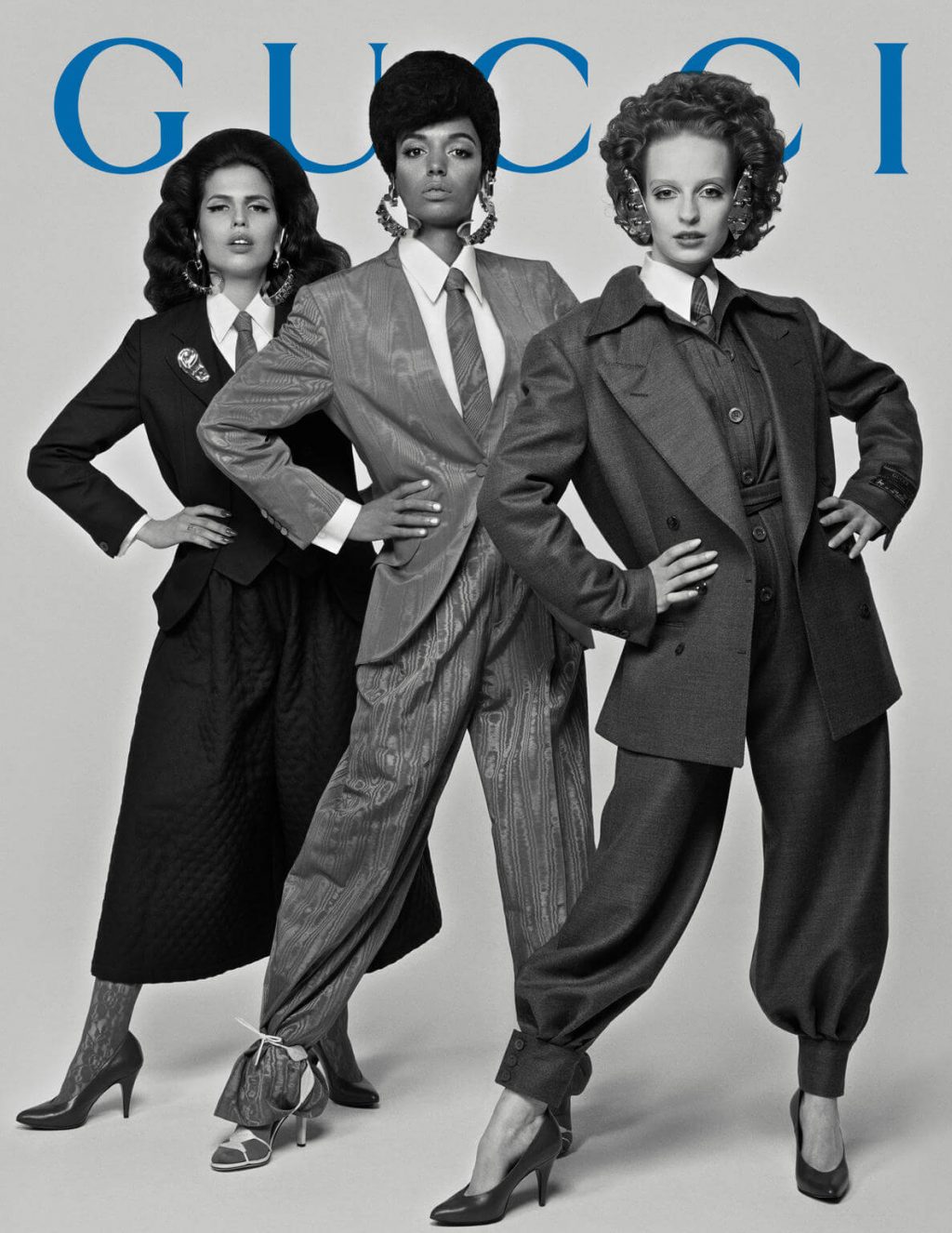 “Taking inspiration from the world of designers and their muses, the Fall Winter 2019 campaign pays homage to the mythical passion, performance and pomp of the fashion circuit. Art directed by Christopher Simmonds and shot by Glen Luchford, the campaign documents a journey through the seasonal fashion wheel: models are caught off guard in the street, backstage, stepping between the front rows and pictured pulling exaggerated, theatrical poses in the photographer’s studio. “
– Gucci 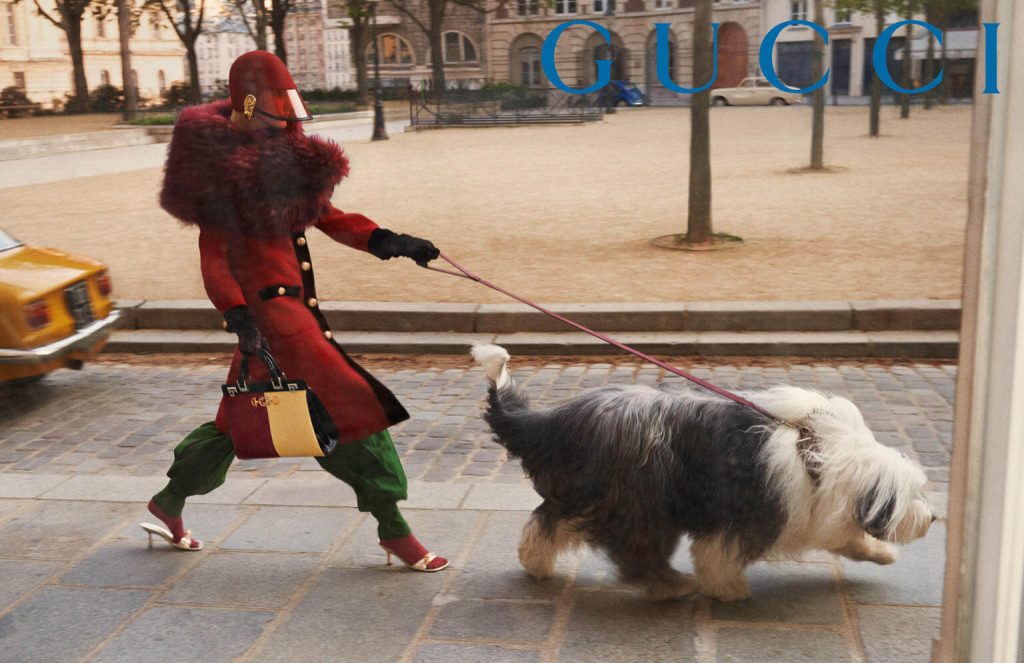 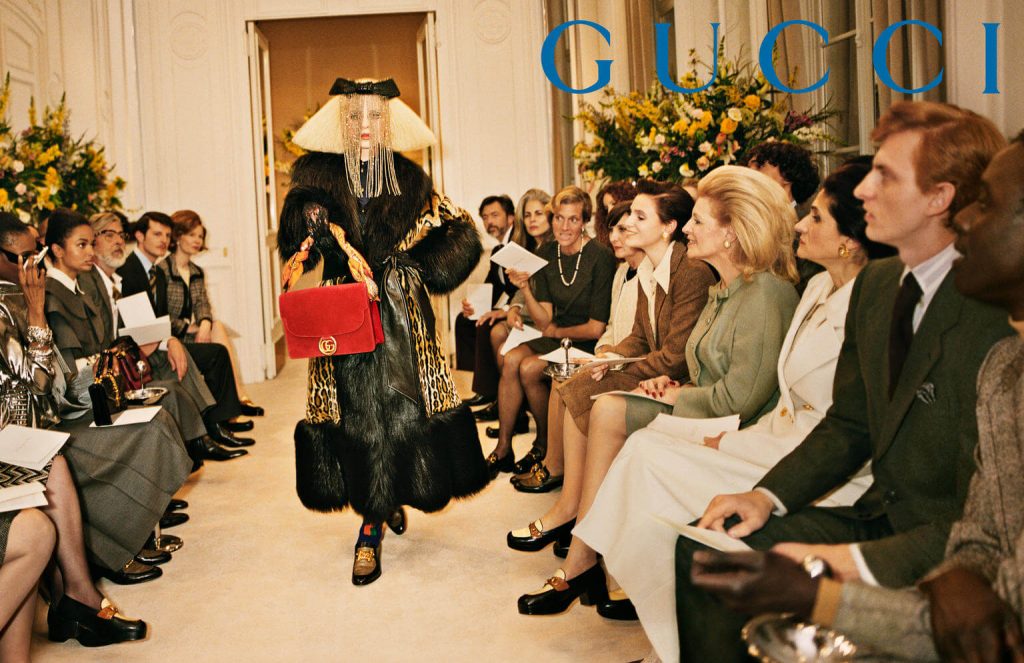 For Pre-Fall 2019, Gucci presents a modern day Roman symposium, where friends and lovers meet to discuss philosophical and political issues, read poems, play music and sport, and dance together in an ancient Greek archaeological site in Sicily. The characters are drawn from the counter-cultural groups typically seen on Venice Beach in California—hardcore punks, rollerbladers, bodybuilders and surfers. 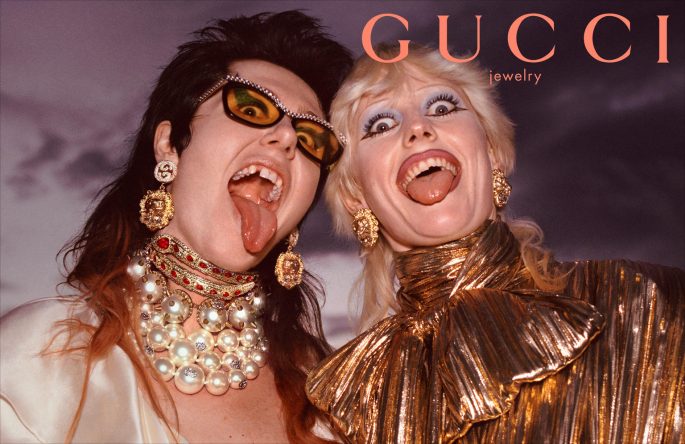 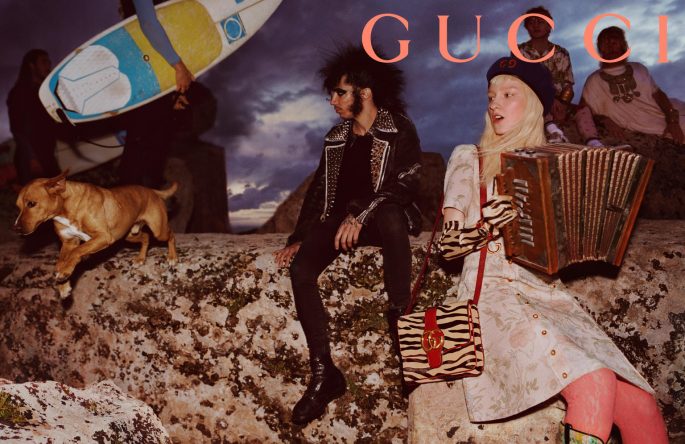 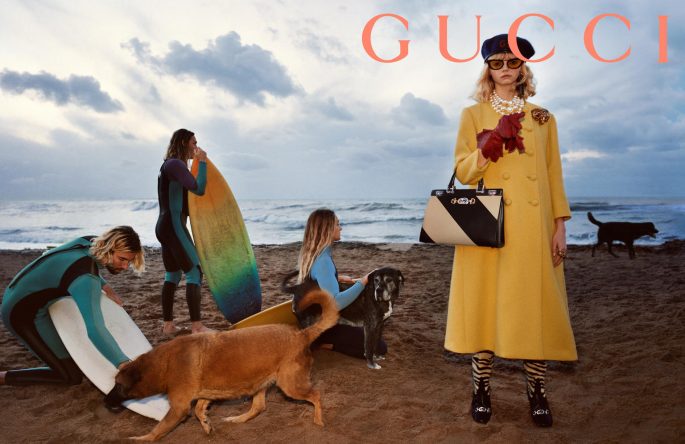 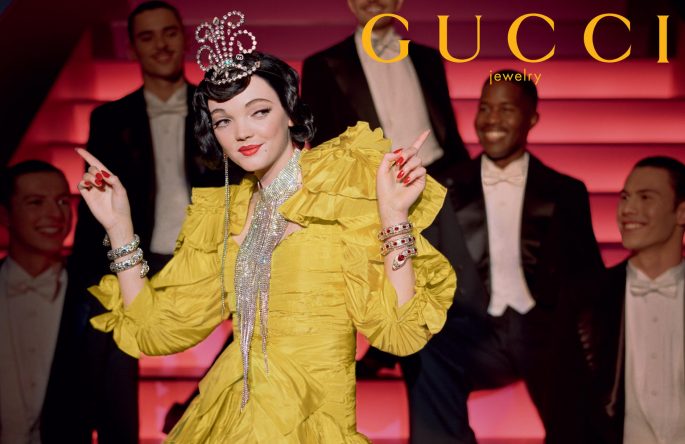 An homage to the golden age of Hollywood and the beginning of celebrity culture, the Gucci Showtime campaign focuses on the joyful and playful spirit of the era. In gowns with long shimmering beads and sequin suits from Spring Summer 2019, the campaign’s characters impersonate famed stars from the 30s and 40s. 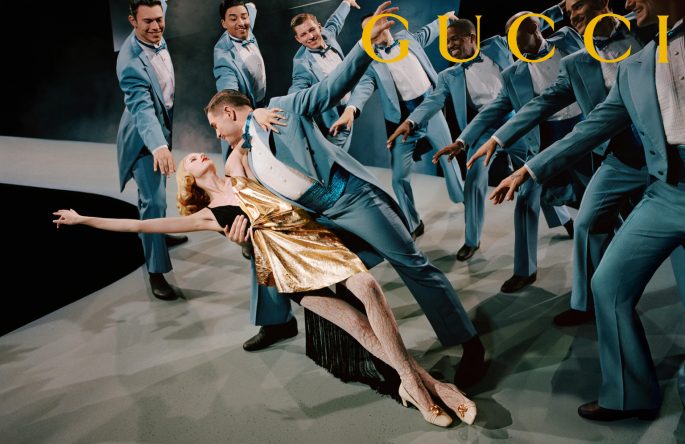 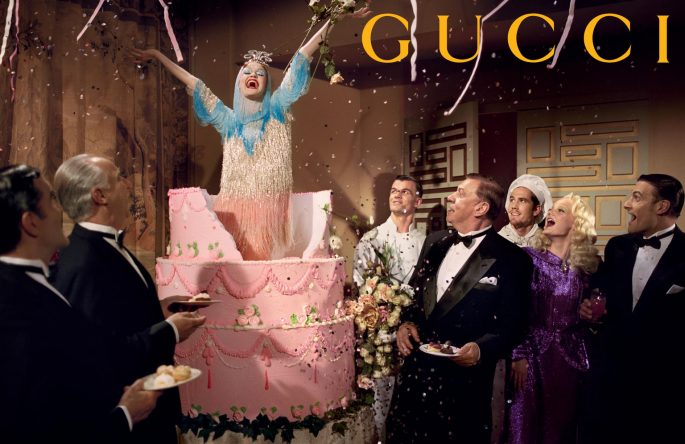 Set in a biblical landscape that references the story of Noah’s Ark, Gucci’s Cruise 2019 campaign assembles a menagerie of gothic characters and their animal companions including a tiger, elephant, ostrich, sheep, and llamas as they prepare for the great flood. 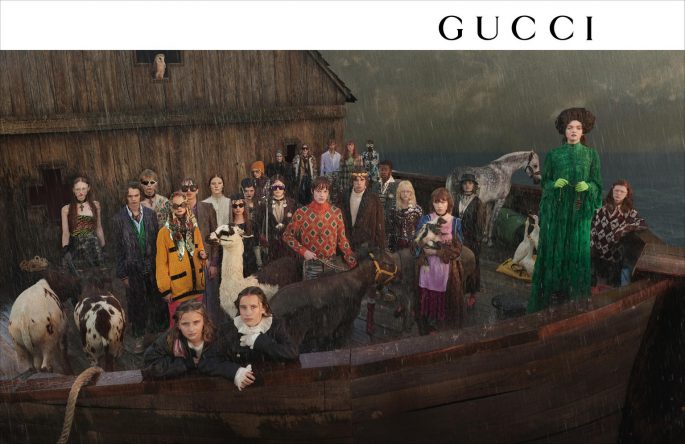 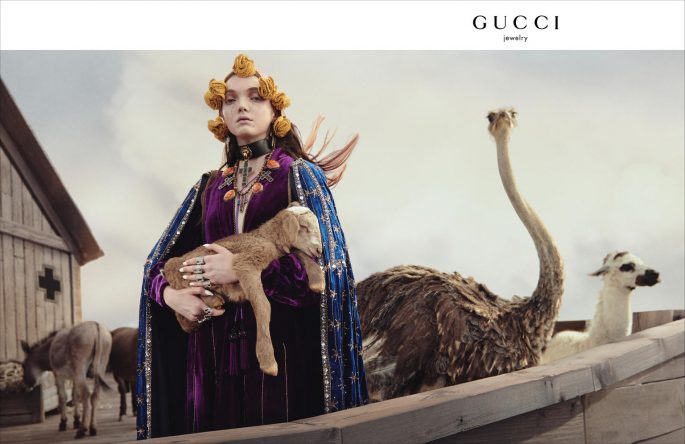 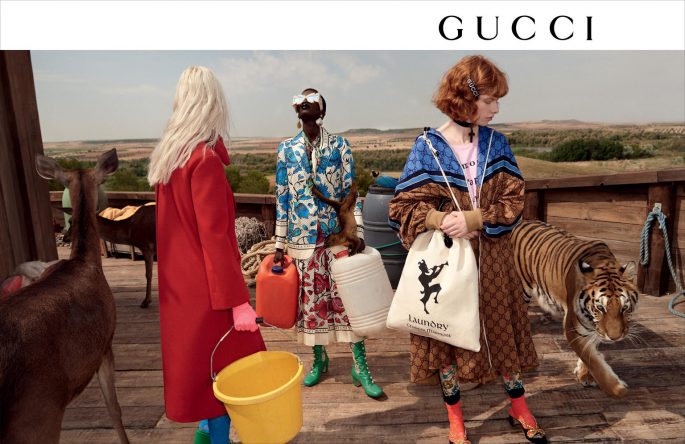 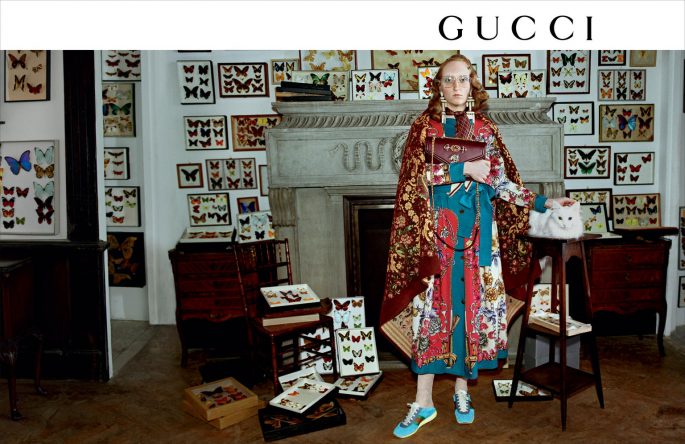 For the Fall Winter 2018 campaign, a family of outsiders gather together for an opulent banquet, highlighting the oddities and objects they have passionately collected alongside the latest collections designed by Alessandro Michele. 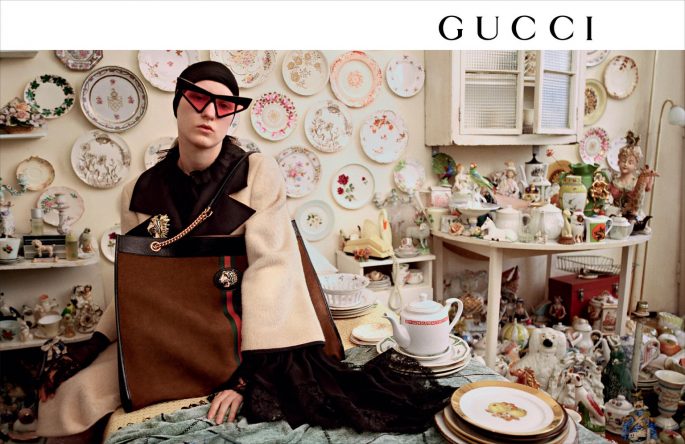 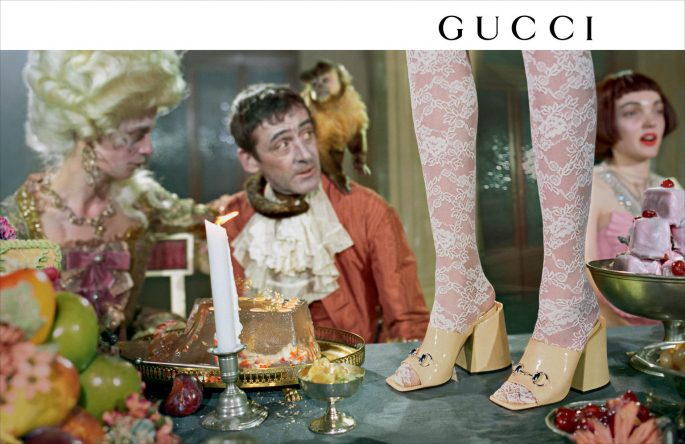 In the Fall 2018 Mens Tailoring campaign, Harry Styles roams the streets of his hometown of London as the famed song ‘Michelle” plays as his anthem. 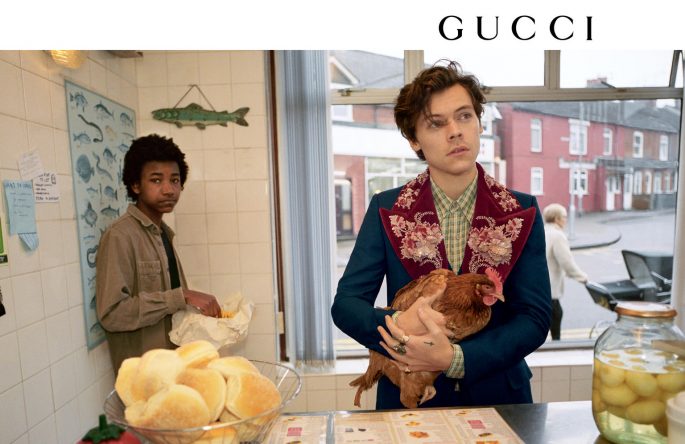 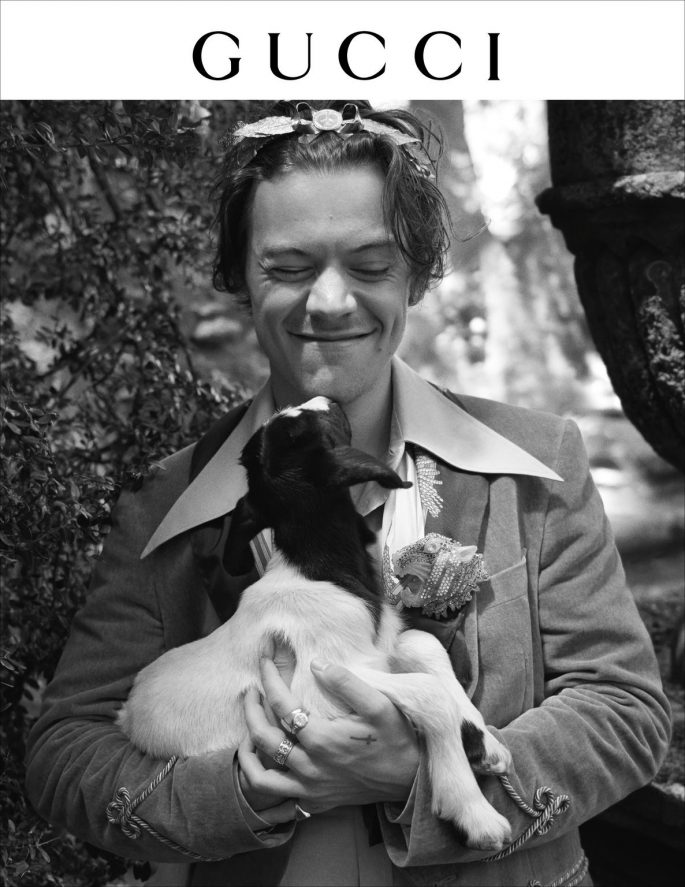 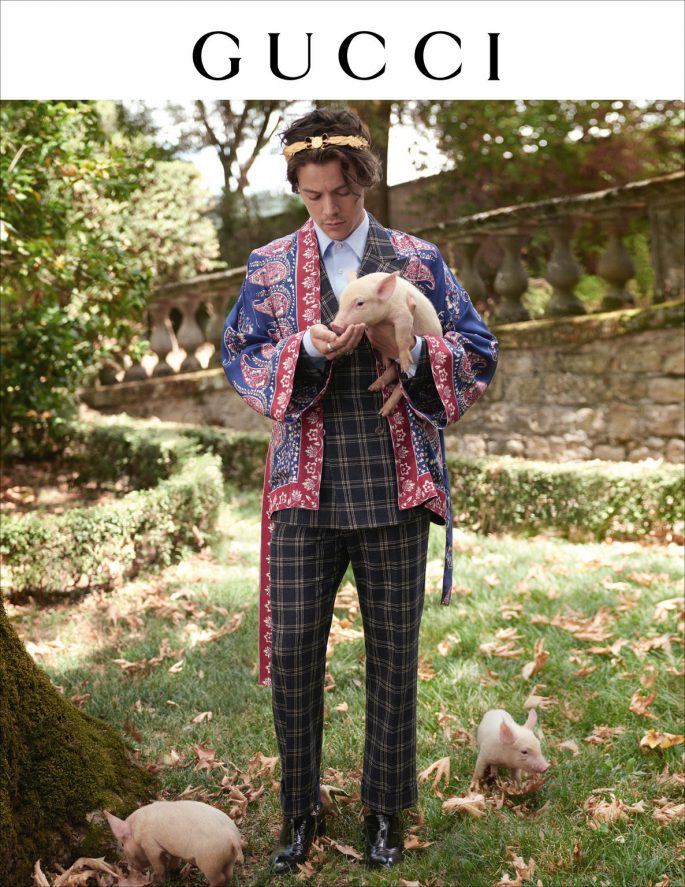 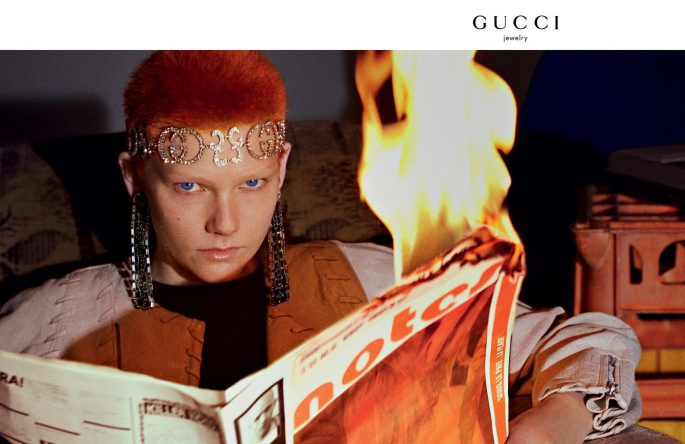 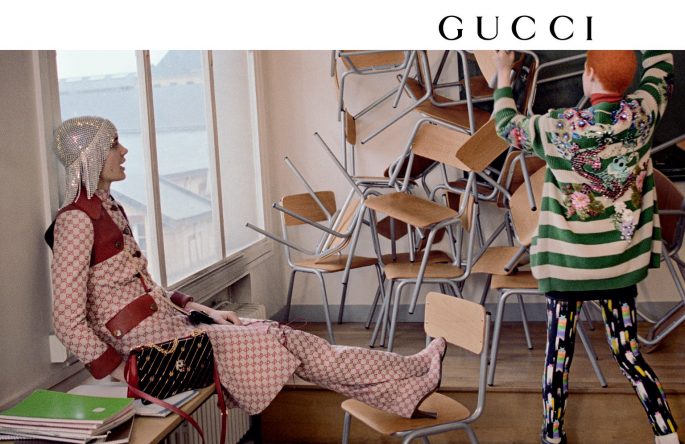 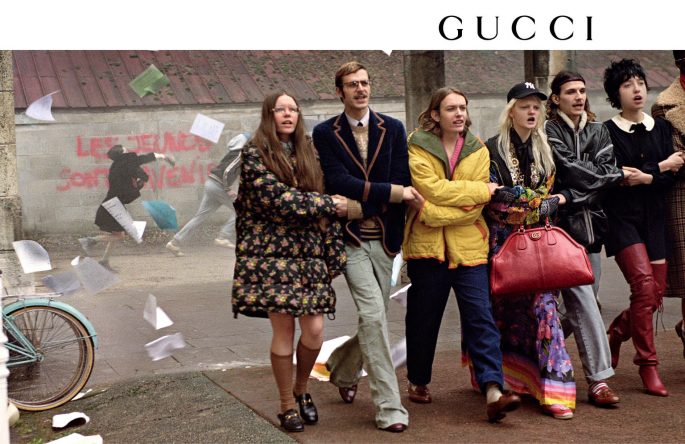